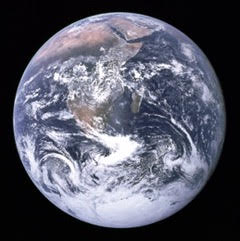 My role as a communications professional is rooted in the environmental movement. I was International Communications Coordinator on the team that organized Earth Day 1990, the first Earth Day that was celebrated internationally. People in 140 countries participated in an unprecedented global outpouring of environmental concern and engagement.

Later, in the mid-1990s I co-wrote (with Plutonium Free Future) the Safe Energy Handbook, which was translated into more than ten languages and used internationally to oppose nuclear power projects.

From 1999-2002, I was on the U.S. Earth Day organizing team and was the lead writer for seven environmental teachers’ guides, distributed to over 80,000 U.S. teachers, on subjects such as biodiversity, forests, water, and renewable energy. Later I collaborated with environmental justice pioneer Carl Anthony as an interviewer and personal editor for his memoir The Earth, the City, and the Hidden Narrative of Race, published in 2017.

It is alarming that in the time since the publications below were written, the biosphere has deteriorated to a degree that we could not have imagined thirty years ago. Mother Earth is in a deepening crisis. Can we protect and restore the living systems on which we depend for our very existence? Will we get our collective act together, summon our wise selves, and make life-sustaining choices? The earth and all life await our answer.

Safe Energy Handbook (1997)
“We want all peoples and all species to enjoy life on earth for countless generations to come. This is a basic criterion for a sustainable society. Appropriate, safe and renewable energy technologies are key to achieving this goal. Working together, we can create societies that endure into the future, living in harmony with the earth.”

Biodiversity: Earth’s Living Treasure (2002)
“Extinction is part of the evolution of nature. However, during five periods in the Earth’s geological history the rate of extinctions has sped up dramatically, resulting in what scientists call a ‘spasm’ of massive extinctions. The last known spasm was 65 million years ago, when the dinosaurs disappeared. Now it is happening again, on an even larger scale.”

Fundamental Forests (2002)
“A forest is a whole ecosystem where communities of plants, animals, and other organisms interact. Not only do trees provide us with wood, paper, fruit, nuts, shade, and natural beauty; they also play an important role in Earth’s natural cycles. When forests are degraded, plants, animals, and humans suffer the loss of food, shelter, and energy.”

WaterWays  (2001)
“Since 1950, global use of water has more than tripled. Worldwide, 3.5 billion people are likely to experience water shortages by 2025. Many major rivers are running dry before they reach the sea. Having overused and polluted our lakes and rivers, we are tapping more deeply into our available groundwater resources, removing them at a faster rate than they can be recharged. Over the long term, this is not sustainable.”

Renew Our Future  (2002)
“Fossil fuels began as plants or animals. Over millions of years, their buried remains were transformed into coal, petroleum and natural gas. These take millions of years to create. When these substances are burned to generate energy, they create pollution and release carbon dioxide, the most significant contributor to global warming, into the atmosphere.”

Smart Moves (2000)
“Carbon dioxide (CO2) occurs naturally at levels that have been relatively stable for many thousands of years. However, burning gasoline and other fossil fuels has dramatically increased the level of carbon dioxide in the earth’s atmosphere. The thickening blanket of CO2 and other ‘greenhouse gases’ traps heat that would otherwise escape, similar to the way heat is held inside by the windshield of a car parked in the sun.”  (no PDF)

PowerShift: Clean Energy Solutions  (2000)
“By tapping the limitless potential of renewable sources such as the sun and wind, we can produce the energy we need in environmentally sustainable ways. Switching to clean, renewable energy sources will create tremendous benefits to society, including huge reductions in pollution, improved human health, and greater energy security.”

Earth Day 1990 International Summary  (1990)
“For the first time, people in almost every country of the world came together to save the Earth. This report of Earth Day 1990 points to, but cannot begin to convey fully, the thousands of creative ways that millions of people on all seven continents celebrated the day. Earth Day showed that when people perceive the magnitude of the global crisis, they are eager to join with others around the world in common cause for the earth.”